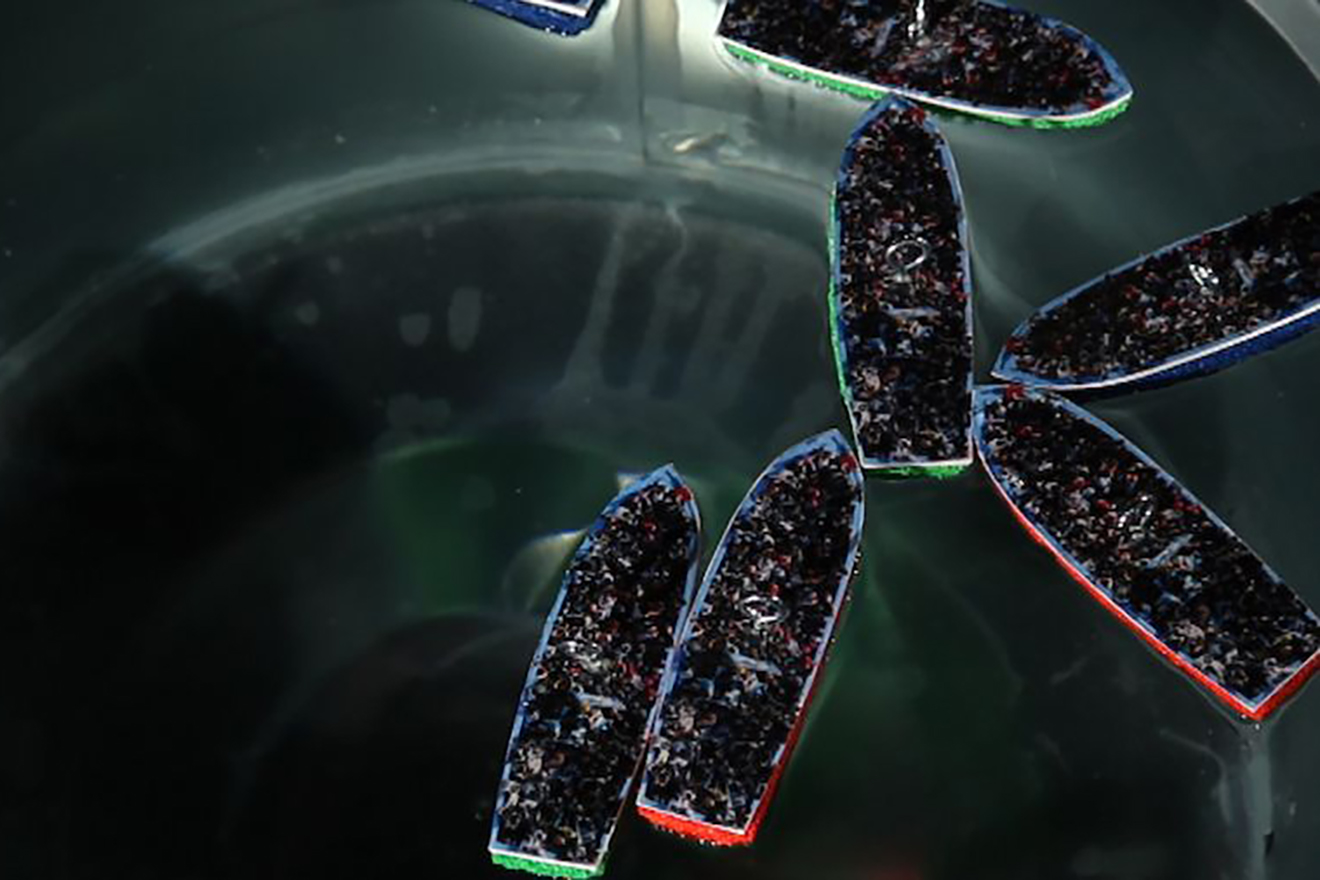 Through a wide variety of formats including sculpture, installation, photography and audiovisual production, Ro Caminal explores the possibility of interstitial places. In the trilogy Moi, un noir. Reloaded (2015), Unfolding Penolope (2017) and Ship of Fools / Hook a boat (2017) –which we present together for the first time– the artist challenges the construction of the other from Western ethnography and its devices of representation, while addressing different approaches and realities of the migration process.
Throughout 2020, the idea of the mask as a new biopolitical frontier has been stressed. Indeed, the logic of any policy of immunity
is to isolate individuals from an external threat and ensure their dominance over otherness (Esposito, 2005). Although it has only gained popularity with the current pandemic, immune policy and disinfection technology is part of the violence with which exiles and migrant foreigners are received at European borders. In addition to the problem of the unresolved colonial past, Europe has developed new border policies in recent decades that combine archaic walls and digital innovation.
An aggressive process of territorialisation that is however compatible with free trade, transnational capital flows and backpacking nomadism. The immune logic is also behind the racialization, stigmatization and exclusion present in our cities, spreading the imaginary of the other as an enemy and feeding the most absurd nationalist projects.
Paradoxically, Europe’s own founding mythology denies any essentialist dream. As Virgil and Plutarch relate, the foundation of Rome was carried out by refugees fleeing the war by erecting a temple dedicated to the god Asylum. Considering the prolonged inter-ethnic exposure, the processes of cultural appropriation developed during the colonial period, the continuous territorial recombinations and the massive population movements that gave rise to the obligatory nature of asylum adopted in the Geneva Convention in 1951, it could be a Eurocentric gesture not to recognize the complexity of such territory as an impure, mestizo, porous and contradictory culture. Rimbaud adopted his famous idea Je est un autre to give an account of a permanent self-contradiction, a sort of intimate splitting that invites us to imagine ourselves as a heterogeneous or multiple being, as a memory of others. Perhaps, from this radical self-questioning, we are also able to see something of ourselves in the other.

Ro Caminal proposes in fact a turn in the way we approach the migrant subject, no longer as another, but as an equivalent life. She does so with an awareness of place, since her many works and researches often begin with scholarships, residencies or travels that have led her to live cities such as Cairo, Alexandria, Algiers, St-Louis, Tunis, Valletta, Yangon, Rosario… as well as to question the cultural background of European cities. This geographical exploration also translates into an exploration of audiovisual formats: from video-creation to feature films, from field work to documentary fiction. In a reinterpretation of Jean Rouch’s film (1957), in Moi un noir. Reloaded (2016), the artist proposes minimizing cultural difference and avoiding the exotic idea, denying the spectator the pleasure of voyeuristic security by showing lives that are no different from her own. Nor does she delve into dramatism, stigmatization and victimization, for far from violently challenging a sub-Saharan community in Salou, the artist’s camera shares with them their everyday spaces. Furthermore, the work Unfolding Penolope (2017), carried out thanks to an OSIC grant that allowed her to travel to Saint-Louis (Senegal) and thus get to know a reality that is not taken into account when dealing with the dimensions of the migratory phenomenon: women who are left in their places of origin waiting for husbands that in the worst case they will never meet again. Oscillating between melodrama and comedy –that field of empathic potential that Samuel Beckett considered the only possible way to deal with tragedy– the artist explores the possibilities of documentary fiction, problematizing the figure of the witness when it comes to providing a true story. Closing the trilogy around sub Saharan migration in Europe, in the diptych Ship of Fools / Hook a boat (2017) made on the basis of a production grant with Hangar, Ro Caminal focuses on the problems of the journey. On the one hand,
The Ship of Fools alludes to the work of Hyeronimus Bosch with the same title, as well as to the essay Madness and Civilization by Michel Foucault (Foucault, 1961), for condemned in an infinite loop to seek a port in the Mediterranean, migrants represent a permanent symbol of exclusion. Finally, Hook a boat tackles from sarcastic recreation the level of commitment of European societies to border policies, as well as what the researcher Pau Cata has observed as “the selective illegality of the journey” (Cata, 2020).

Ro Caminal is a researcher, artist and filmmaker. She is a member of Platform Harakat Collective. With an educational background in the fields of Fine Arts and Anthropology, she develops her artistic practice exploring the world of re-presentation, hybridizing undisciplined between the two fields. She has been resident in different art centres such as Can Xalant, Sant Andreu Contemporani, Waaw, Villa Abdelllatif, BLITZ, or Townhouse. She has participated in numerous collective exhibitions; Post-it City, Casual Cities (CCCB), Mulier, Mulieris 7-9 (MUA), Biennial de Valls 2103 (Valls), Extralocal (AVic), What can we do? (Can Felipa), Inverted Time (Can Felipa), A Dilemma (Arts Santa Monica), Gran Angular (Fabra and Coats), Translocations
(Arts Santa Monica), Puebla International Biennial of Video (Mexico), Play off (Málaga), TIVA 16 International Video Art Exhibition of the National Museum of Taiwan (Taiwan), Women are the ones watching (Buenos Aires), Anti-Spain. ABM (Madrid), The Art of Getting Lost in the City. Gudran (Alexandria), 1st International Biennial of Lagos (Nigeria), Transformer (Malta), Salam London (London). Her films have been shown at various film festivals such as Ethnocineca (Vienna), Festival of Migrant Film (Slovenia), Migrant Cinema (Barcelona), Chouftouhonna (Tunisia); Bangalore Short film Fest (India), Intermediaciones (Colombia) or the Sharjah Film Platform (United Arab Emirates). Winner of the 2015 Ciudad de Valls Award. (Guasch-Corantny Biennial), Second prize Julio Antonio Biennial 2019 and the Girona Biennial 2019 Award. Her work is represented in the collections of the Valls Museum, the Art Fund of the Generalitat of Catalonia, the Civit Collection, the Diputación de Tarragona, A.A.R.C. from Algeria and the Cal Cego Collection.
rocaminal.com